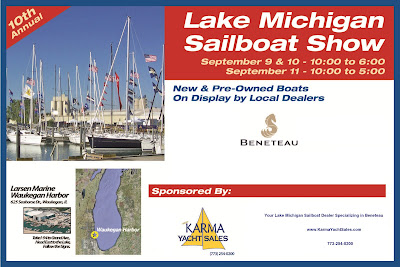 Crains Chicago: Chicago Harbors- Build it and they will come?

Photo Credit: Crains Chicago
Crain's Chicago Business: Sailing slump leaves Chicago scrambling to fill empty boat slips
For the first time in recent memory, the long waiting list for a coveted boat slip in a Chicago harbor has all but evaporated—good news for boaters who usually wait years for a prime slip, but bad news for the Chicago Park District, which is counting on a flotilla of pleasure craft to help fill its 10th marina, a $110-million harbor under construction at 31st Street.
The recession, combined with new slots at other marinas, helped drain the wait list. The sluggish economy is exacting an especially heavy toll on Chicago boating, with the city now scuttling plans to open an 11th harbor after the new, 1,005-slip 31st Street Marina opens next season. The additional capacity coming online when demand has sharply fallen raises questions about whether the cash-strapped city overextended itself in planning new slips.
“I've seen vacancies in almost every harbor. It seems they've gone ahead with this expansion at a time when people aren't putting their boats in because of the economy,” says Tim Harrington, the immediate past commodore of the Belmont Yacht Club, who visits all the harbors in his job making deliveries for boat dealers.
It costs roughly $5,000 a year to moor a boat in Chicago harbors. Add to that the cost of fuel and winter storage and the annual tab can reach $10,000. Those costs have pushed boaters to Waukegan and other areas, where fees are lower and accessibility to good slips is easier.
A SLIP OF THE MARKET
Encino, Calif.-based Westrec Marina Management Inc., which teamed up with the Chicago Park District to manage the city's nine harbors, is still banking on the idea that if you build it, they will come to 31st Street, even as boat sales are down 50% from three years ago, according to the Chicago-based National Marine Manufacturers Assn.
Construction of the slips is financed by a revenue bond covered by the slip fees shelled out by boaters. But more important, boating fees help fund the Chicago Park District, representing 5% of its $400-million budget.
“We don't expect that people will buy boats and come instantaneously, but we have confidence it will happen,” says Westrec Vice-president Scott Stevenson, adding that the park district projects the slips will be full in four years. “If you look at the response to the boating market in Chicago, as we have built slips over the past 13 years, the market has absorbed them instantaneously.” In an effort to attract boats sooner, Westrec for the first time, has started a marketing company for the marina.
The park district expects the 31st Street marina to be at 42% capacity next year with net revenue of $2.7 million. Westrec anticipates revenue from the marina to increase to $6.5 million in 2014 and $8.3 million in 2020. The city expects the harbor to be 95% filled by 2017.
In 2013, the debt service kicks in at $4.6 million and will increase to $6.7 million in 2014 and $11 million in 2040, according to the park district, which continues to operate without a director. Tim Mitchell resigned earlier this year as superintendent after questions were raised about how he ran the office. Longtime chief operating officer Mike Kelly is acting superintendent until Mayor Rahm Emanuel appoints a new one.
Westrec, which gets a percentage of mooring fees from any construction in the harbor system, recently added 300 slips to four harbors at a cost of $6 million. The additional slips shrank waiting lists already declining since the 2007 recession.
The company, whose contract with the park district is up next year, says it doesn't have access to numbers on the pre-recession waiting lists.
IN A HOLDING PATTERN
In August 2008, 550 were on the waiting list and 800 on the list to transfer to another harbor. In 2010, 481 were on the waiting list and 442 on the transfer list. And this month, there are 384 waiting and 290 on the transfer list—and there are about 150 slips, moorings or star docks that are still empty.
That boat slips are becoming more available is no surprise to Dirk Lohan, who heads Chicago architecture firm Lohan Anderson. Mr. Lohan sold his 55-foot boat a year ago after 40 years in Chicago's harbor system.
“I'm getting older, and the boat is a lot of work. Every time I wanted to go somewhere, I needed a whole crew. All the organizing got to me,” he says.
It's a familiar tale, says Chicago-based Karma Yacht Sales owner Lou Sandoval, who is seeing an uptick in sailboat sales over last year.
“People are going out of boating faster than they're coming in. Couple that with a bad economy and high unemployment, and it's going to be a few years before you see boaters or sailors having confidence to get into the market,” he says.
Thom Dammrich, president of the National Marine Manufacturers Assn., echoes Westrec's confidence that the market will return.
“It's cyclical,” he says. “I think the economy will improve, and in five years we'll be looking back and wishing for the days of no waiting lists.”

Read the original Article on Crains